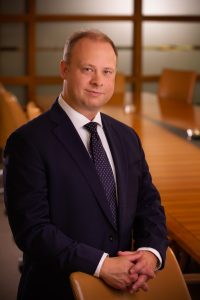 In Marx v. Morris, 2019 WI 34, the Wisconsin Supreme Court interpreted the Wisconsin LLC Act in an unexpected way. Specifically, Marx held that LLC members may bring suit in their capacity as members, instead of on behalf of the LLC, against other members, even when the harm alleged is primarily to the LLC. This deviates from corporate law principles, which require that, if the primary harm is to the corporation, shareholders must bring a derivative action on behalf of the corporation and cannot sue in their own capacities.

Marx arose out of the operations of North Star Sand, LLC. North Star was a Wisconsin LLC with six members. Each member was itself an LLC, and each of the member LLCs was controlled by a different individual. Among other assets, North Star had a wholly owned subsidiary, Westar Proppants, LLC. Dispute arose when one of North Star’s members sought to purchase Westar.

During a meeting to conduct North Star’s business, Morris (who controlled R.L. Co., LLC, a member of North Star) offered to purchase Westar for $70,000. (He made this offer on behalf of DSJ Holdings, LLC, another entity in which he had a partial ownership interest.) A majority of North Star’s members voted not to accept the offer. 2019 WI 34, ¶13.

After the vote, Morris became “very aggressive.” Id., ¶14. He then made a new motion to sell Westar to DSJ. Murray (who controlled R&R Management Funds, LLC, another member of North Star) objected on the bases that a vote had already occurred, that there was insufficient notice of this motion, and that Morris had a conflict of interests. Nonetheless, when the members voted on Morris’s motion, it passed. Id. DSJ subsequently sold Westar to another entity for a “substantial sum.” Id., ¶15.

Marx, Murray, and their LLCs alleged several claims against Morris and his LLC, including violation of § 183.0402 (“Duties of Managers and Members”). Morris moved for summary judgment on all claims, asserting that Marx and Murray’s claims properly belonged to North Star (which was not a plaintiff) and that the Wisconsin LLC Act displaced any common-law duties of LLC members (as well as claims arising from alleged breaches of such duties).

The circuit court denied Morris’s summary judgment motion. The court of appeals certified the case to the Wisconsin Supreme Court, which affirmed the circuit court’s ruling.

In a majority opinion authored by Chief Justice Roggensack, the Supreme Court rejected Morris’s argument that members of an LLC lack standing to sue in their own capacity and that the only permissible plaintiff here was North Star. The Supreme Court reviewed general principles of LLCs and how they differ from corporations, specifically noting that LLCs may elect to be taxed as partnerships, such that income, gain, loss, and deductions pass through to the individual members. See 2019 WI 34, ¶¶22-34. Based on that review, the Court concluded that an injury to an LLC is not the same as an injury to a corporation where the LLC has adopted partnership-like treatment in its Operating Agreement. Accordingly, the corporate standing principle that individual shareholders cannot directly sue a corporation’s director or officers when the primary injury is to the corporation is inapplicable. “injuries to [an LLC] and to its members are not mutually exclusive because financial injury to [the LLC] flows through to its members just as injury would if [the LLC] were a partnership rather than an LLC.” Id., ¶43. The court further explained that nothing in ch. 183 (the portion of the Wisconsin Statutes governing LLCs) requires claims against LLC members to be brought in the LLC’s name. Id., ¶¶45-46.

The Court also held that ch. 183 did not preclude the plaintiffs’ common-law claims. Wis. Stat. § 183.1302(2) states “unless displaced by particular provisions of this chapter, the principles of law and equity supplement this chapter.” The Court held that a statutory displacement under ch. 183 must be specific and that the LLC Act does not “constitute[] the entirety of an LLC member’s or manager’s obligations to other members and to the LLC.” 2019 WI 34, ¶53. Because Morris did not develop arguments for displacement of each claim, the common-law claims survived summary judgment. Id.

The separate opinion argued that Marx and Murray should not have been able to bring any claims in their individual capacities because they are not members of the LLC. Id., ¶¶71-80. Furthermore, it contended the LLCs they control (which are members of North Star) lacked standing in this instance because Wis. Stat. § 183.0305 provides that members may bring suit by or against the LLC only if:

Justice Kelly would have held that the first point is not at issue in this case, and the second point does not permit the members to bring suit because there was no majority vote by disinterested members.

The separate opinion further concluded that the majority’s reliance on “differential treatment of LLCs and corporations in matters of taxation and distribution of profits” is misplaced.  Id., ¶¶80-89.  Any differences are “largely a matter of choice,” and should not serve as a basis for members to be able to sue an LLC in their personal capacities and not on behalf of the LLC.  Id., ¶84.

This case breaks new ground in Wisconsin law by holding that members of an LLC may pursue claims directly against other members of the LLC, even when the alleged harm is primarily to the LLC. This is noteworthy not only because it deviates from corporate-law principles, but also because it provides an avenue around Wis. Stat. §

183.1101’s requirement that an action on behalf of a LLC must be authorized by a majority vote of disinterested members. The separate opinion warns that “immediate, real-life problems” will result from this sea change in Wisconsin LLC law.  2019 WI 34, ¶86 (Kelly, J., concurring in part and dissenting in part). Only time, and further actions in the circuit courts, will tell.